The Allman Brothers Band ( B5 )

Executives suggested to Walden that he relocate the band to New York or Los Angeles to "acclimate" them to the industry. "They wanted us to act 'like a rock band' and we just told them to fuck themselves," remembered Trucks. For their part, the members of the band remained optimistic, electing to stay in the South. "Everyone told us we'd fall by the wayside down there," said Gregg Allman,but the collaboration between the band and Capricorn Records "transformed Macon from this sleepy little town into a very hip, wild and crazy place filled with bikers and rockers". The band rented a $165-a-month farmhouse on a lake outside of Macon, the busy comings and goings at which reminded them of New York City's Idlewild Airport. Idlewild South was the home of rehearsals and parties, and was "where the brotherhood came to pass," according to roadie Kim Payne; "There was a pact made out there around a campfire—all for one and one for all ... Everybody believed [in the band] 100 percent." Much of the material presented on the band's second album, Idlewild South, originated at the cabin. Oakley's wife rented a large Victorian home on 2321 Vineville Avenue in Macon and the band moved into what they dubbed "the Big House" in March 1970. 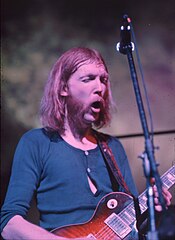 Duane Allman, the group's leader, was killed in a motorcycle crash in 1971.
The band played continuously in 1970, performing over 300 dates on the road traveling in a Ford Econoline van and later, a Winnebago, nicknamed the Wind Bag. Walden doubted the band's future, worrying whether they would ever catch on, but word of mouth spread due to the band's relentless touring schedule, and crowds got larger. The close proximity of the Winnebago brought about heavy drug use within the group, and all in the group, with the exception of the brothers, were struggling to make a living. In one instance, touring manager Twiggs Lyndon stabbed and killed a promoter for not paying the band; he later cited temporary insanity.